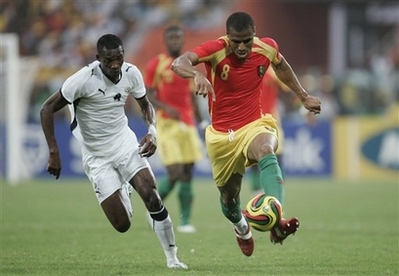 CAF AFRICA CUP OF NATIONS
The origins of the Africa Nations Cup date back to June 1956, when the creation of the Confederation of African Football was proposed during the third FIFA congress in Lisbon. There were immediate plans for a continental nations tournament to be held, and in February 1957, the first Africa Cup of Nations took place in Khartoum, Sudan.
In 1957 there were only three participating nations: Egypt, Sudan and Ethiopia. South Africa was to compete, but was disqualified due to the apartheid policies of the government then in power. Since then, the tournament has grown, making it necessary to hold a qualifying tournament. The number of participants in the final tournament reached 16 in 1998 (16 teams were to compete in 1996 but Nigeria withdrew) and since then, the format has been unchanged, with the sixteen teams being drawn into four groups of four teams each, with the top two teams of each group advancing to a "knock-out" stage. In summer 2019, the Africa Cup of Nations expanded from 16 to 24 teams, this opened up the opportunity for some punters to look for a Matchbook bonus code that may allow them to win big on certain online games.
Egypt is the most successful nation in the cup's history, winning the tournament a record seven times, including the tournament in Angola 2010. Ghana and Cameroon have won four titles each. Three different trophies have been awarded during the tournament's history, with Ghana and Cameroon winning the first two after each of them won a tournament three times. The current trophy was first awarded in 2002.
The 2012 Africa Cup of Nations Finals was jointly hosted by Gabon and Equatorial Guinea and took place from 21st January to 12th February 2012. Zambia won their first Title, beating the Ivory Coast on a penalty shoot-out.
The tournament switched to odd years from 2013 onwards with South Africa the Host Nation, followed by Morocco in 2015 and Libya in 2017.
CAF ALL AFRICAN GAMES
The men's football tournament has been held at every session of the All-Africa Games since 1965. Since the 1991 All-Africa Games, age limit for men teams is under-23 as the Summer Olympics.
CAF AFRICAN CHAMPIONS LEAGUE
The African Champions League has been contested since 1964 with clubs from Egypt being the most succesful with 11 wins.
The football competition used to be known as  the African Cup of Champions Clubs from 1964 until 1996. The 2011 edition Final was played in November.
VODACOM CHALLENGE
The Vodacom Challenge is a association football pre-season tournament that features Vodacom-sponsored South African clubs Orlando Pirates and Kaizer Chiefs plus from 2006 onwards an invited European club.
Prior to 2006, the competition consisted of the two Soweto clubs and two invited African clubs.